This week I have been in London for a meeting so, I thought I would make the most of my time and visit a couple of exhibitions.

First off was the British Folk Art exhibition that has just opened (and on until 31 August) at Tate Britain. It is the first major historical exhibition of Folk Art at a national art museum and takes in an array of genres from the 17th – mid 20th century.

My favourites exhibits were the quilts and embroidered works of art. The Wrexham Tailors Quilt was on show – always fascinating! 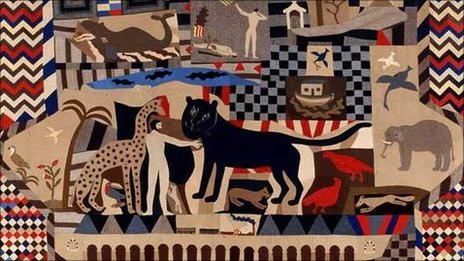 There was a Crimean quilt – made with felted wool by injured soldiers during the Crimean War.

The Bellamy Quilt, which is embroidered was also fascinating. Check out this link for more information about the quilt.

There were also a number of embroidered pictures by Mary Linwood (1755-1845). Mary made her first embroidered picture when she was thirteen years old, and by 1775 had established herself as a needlework artist.[2] By the age of 31, Mary had attracted the attention of the royal family,[3] and she was invited to Windsor Castle by Queen Charlotte to show her work. For nearly seventy-five years Mary worked in worsted embroidery, producing a collection of over 100 pictures that specialised in full size copies of old masters.

It is an exhibition that is certainly well worth a visit.

I also visited the V&A Museum to see the Wedding Dress exhibition that is on at the moment. A fabulous display of wedding dresses from as far back as 1775 to the present day. It is also surrounded by a great variety of fashion exhibits by well known designers such as Jean Paul Gautier, Vivienne Westwood, Alexander McDonald etc. All wonderful but makes you realise that what goes around eventually comes around again in the fashion world!